Mike is your typical Kiwi tradie.

He’s rough around the edges, he’s got a heart of gold, and he knows his way around a tool belt. But when it comes to business, he’s a bit of a novice.

A year ago, Mike took the plunge and set up his own business.

He was skilled in his trade, but he quickly realised that there was more to running a successful business than just being good at what you do.

Mike, quickly fell into the trap of working long hours, often starting at the crack of dawn and working late into the night.

He employed a full time person to help him on the tools, but often had to fix up his mistakes as he just didn’t have enough time to train him properly.

By the time Mike was getting home from work, he was often worn out from the day’s stressors of being a business owner and had to deal with the full out of missing yet another one of his children’s rugby games.

His wife was angry, and she felt like she was raising their children alone.

Mike had always prided himself on being a present husband and father, but ever since he had started his own business, it seemed like he was never home.

If he did make it home in time for dinner, he was so exhausted that he could barely keep his eyes opened and he began to wonder if owning his own business was really worth it?

A few weeks later, Mike was in the middle of his workday when he got a call from his wife. She was distraught because none of her cards were working.

It was only then that Mike realised that he had been so busy on the tools that he hadn’t been keeping an eye on the accounts and instead of doing invoices for the past weeks job, he had committed to spending time with the family.

He felt terrible that he had let his family down and now they were in a bind because of it.

“I’m really sorry, honey,” he said, trying to sound reassuring. “I’ll get on it right away and we’ll have the money in no time.”

But even as he said the words, Mike knew it was going to be tougher than he thought.

He owed a few people money already, and now with Christmas coming up… well, things were looking pretty bleak.

He spent the next few days scrambling to get everything sorted out, but somehow it all went wrong. One client refused to pay because the job wasn’t up to scratch and Mike just couldn’t afford to do it again.

Mike didn’t know how to fix things, but he knew he had to try and he did something many Kiwi tradies would find difficult – he asked for help.

When we first sat down with Mike, he had no idea which areas of his business were at risk.

He was so focused on just making money that he hadn’t even considered the possibility of things going wrong.

But we quickly identified the areas that were most vulnerable and helped him put together a plan to protect himself.

Mike engaged us to do his book keeping, so his wife would never have to worry about money again.  We also helped Mike put together a business plan, cash flow forecast and he engaged in regular accountability sessions.  Something that he never new he needed before.

In other words, he took the necessary steps to ensure his business could weather any storm. And we were there every step of the way, cheering him on and helping him stay on track.

We’re proud to say that Mike is now one of our success stories.

He’s built a thriving business that provides for his family and gives him the freedom to live the life he wants. And it all started with a conversation asking for help.

If you’re feeling like Mike did, stuck in the business cycle of work, work, work with no end in sight, then we urge you to reach out and ask for help. It’s the first step on your journey to success.

We’re here to help you make your business dreams a reality so feel free to get in touch.

We offer a no-obligation, free initial consultation to discuss your business goals and aspirations.

Let’s chat about how we can help you take your business to the next level. Contact us today!

So, there you have it – lessons from a tradie who took the plunge into business and came out the other side successfully.

If you’re looking for free resources that would help you achieve the success that you want for your business, then we recommend reading this article next: Three Essential Tools for Business Success

Are you struggling to make your business work?

Insight CA Limited is a team of experienced Auckland-based chartered accountants and business advisors who can help. We’ll give you the power to see what’s really happening in your business, so you can take control and start making progress. Click here to learn more about how we can help you achieve your goals. 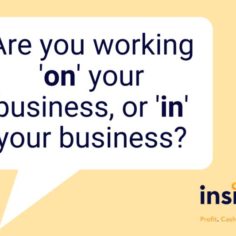 Are you trying to do everything by yourself? How much of what you do could be done... 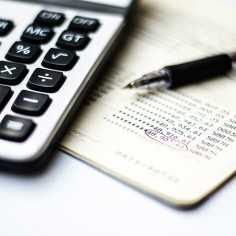 There is no greater pain for a small business than not getting paid.   Today, data trends... 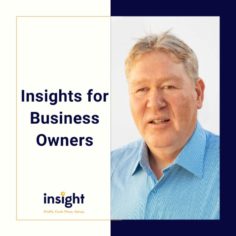 How confident are you going forward?